What do slime mold, ants, and fish have in common? Their collective movement patterns have all been surveyed and studied. Now that modern aerial viewing technology has liberated us from the lab, we can add wildebeest to that list!

Most of us have seen impressive videos shot from airplanes showing the “Great Migration” across the Serengeti, but planes can be invasive and influence the behavior of a herd. Now that technology has set the stage for stealth-viewing migrating land animals from space, interesting patterns are being recognized.

From tracking the daily locations of GPS-collared individuals, to the seasonal movements of entire herds, a diverse international team of researchers hopes to link individual behaviors to group behaviors to improve understanding of the complex drivers of animal migrations. Ultimately, they hope to develop new techniques for studying animal behavior that may aid conservation planners in their efforts to protect migratory pathways.

Lacey Hughey, a PhD student at the University of California at Santa Barbara (UCSB), is part of the team studying the ecology of animal movement in Serengeti National Park. 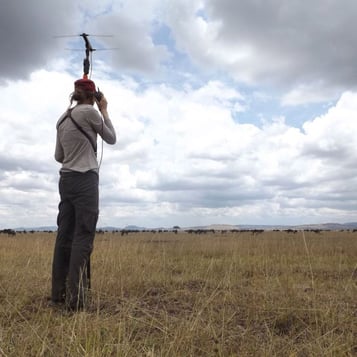 Hughey said the research was inspired when her advisor, Doug McCauley, saw a Google Earth image that caught his attention. “He saw wildebeest in a donut-shaped pattern and thought it looked like a school of fish trying to collect the group to make a move, or to avoid a predator. This made us think about what we might learn from looking at the grouping patterns of larger animals in aerial and satellite images.” 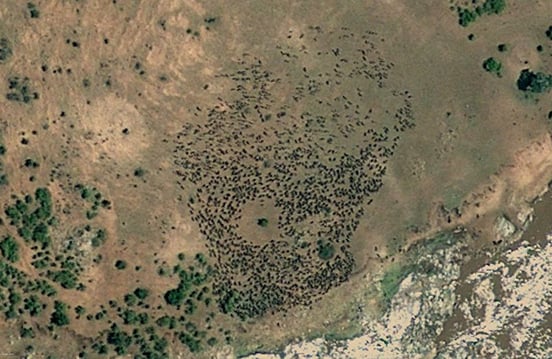 Wildebeest herd in a donut-shaped geometry.

They began to collect images from Google Earth and, eventually, they went into the field and commissioned satellite images from vendors. Later, they added drones to their equipment, including a small quad copter and, ultimately, a tethered aerostat (balloon) with a gimbal-mounted camera. 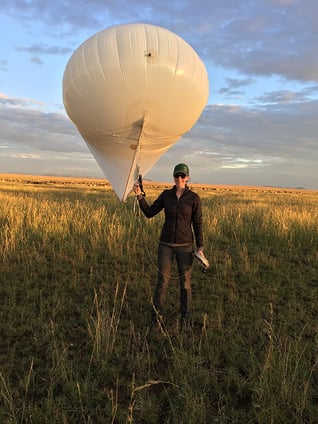 The early efforts focused on simply identifying repeated patterns across the landscape. “We found about three or four geometries that we saw repeatedly and could quantify reliably. 1. The donut, technically a “vacuole;” 2. A line, sometimes called a “marching line;” 3. The wavefront, seen at the leading edge of a grazing herd on the move, and; 4. “dispersed,” or animals grazing in one place.”

With the help of aerial viewing, they can collect data on individuals while simultaneously observing the geometry and movement of an entire herd. However, the research creates more questions than answers at this stage. For instance, investigators are wondering what they might be able to learn about collective intelligence in large mammals. Hughey pointed out that “When the herd moves, the animals don’t typically follow one individual. Instead, they seem to sense and share information about the environment as a collective group.” A herd that has thousands of individuals spread out over miles is somehow able to move en masse over thousands of kilometers toward their food source … and find it! 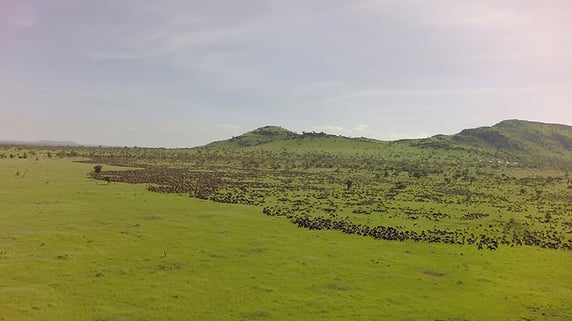 Wildebeest herd in a wavefront.

Hughey used Wildnote to record field observations, integrate photographs, and streamline data collection and processing. Before incorporating Wildnote, Hughey used pen, paper, a laptop, and excel from a vehicle, which was “way more cumbersome and difficult,” she said. “Wildnote helps because there are a lot of technical details to keep track of, and Wildnote has a really elegant way of displaying data and metadata."

This study began in 2013 and is slated for completion in 2019. The project is led by an international team of researchers from the United States, United Kingdom, and Tanzania, and funded by the National Science Foundation.

The video linked below showcases the innovative work being done by these researchers in Serengeti National Park, Tanzania. 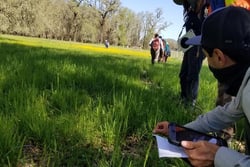